After a poor start to the championship, Poitiers Basket wants to react quickly and that needs to happen on Friday in Evreux.

WHAT IS AT STAKE IN THIS MATCH

Whether we are looking at PB86 or ALM, the aim will be the same – to score to start to get some points. Poitiers lost its first two matches in the championship, but Evreux has not done any better (beaten 76-104 by Blois and 82-75 by Nancy). Even if it is all far from over, getting a first win is important for both teams.

This is a very different team from last season that PB will be up against on Friday evening. Apart from Ruphin Kayembe, who has been with the club since 2017, this is a completely different team for the start of the 2019-2020 season. That helps explain their poor start. However, a few of the players, in particular, the French ones, have moved down from the upper level of Pro B (Fabien Paschal, Florent Tortosa, Paul Rigot etc…). That should allow the team from Evreux to get a decent result in this tough championship.

THE ONE TO WATCH: RUPHIN KAYEMBE

For his third season with the club, the Congolese player got off to a great start with 16pts, 8rbds and a score of 21.5 from the first two matches of the season, Kayembe is the star player in the Evreux team. We should be able to look forward to a great duel against the team from Poitiers. 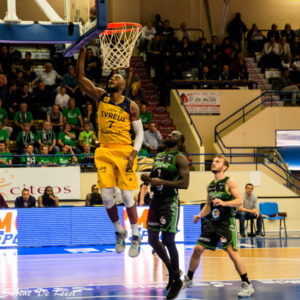