After passing through the Sunda Strait and heading due north towards Vietnam, the crew on IDEC SPORT is making slow progress today (Sunday) along the western coast of Borneo with less than 700 miles to go to the finish in Ho Chi Minh City. 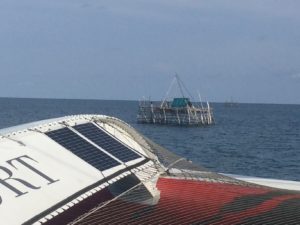 Along the route, the crew has encountered some strange and unusual things, such as the hundreds of fishermen’s huts on stilts, as can be seen in the pictures sent back from the boat, which so surprised Francis Joyon: “Nothing is marked on the charts, but it’s far from being an illusion. We encountered a hundred or so of these huts. Yesterday, it was a tricky night. We found some wind, but ran into nets three times in the dark, but we didn’t have to dive to free them. The boat was slowed down and then passed over them creating some excitement aboard.”
Pierre Giboire1 December 2019
416 1 minute read
Show More
Share
Facebook Twitter LinkedIn Tumblr Pinterest VKontakte Telegram Share via Email Print