The six sailors on IDEC SPORT have been sailing in the Southern Hemisphere since 0300hrs this morning. They crossed the Equator after 5 days and 1 hour, almost 14 hours ahead of the time they had to beat. Sailing some way off the coast of Brazil, they are now once again clocking up the miles and accelerating… while they prepare for the next transition. Next up, the Cape of Good Hope. 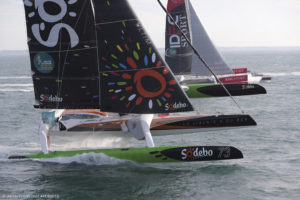 It was predicted and they managed to do it. They crossed the Equator just five days after leaving Ushant. The crew of six on IDEC SPORT skippered by Francis Joyon celebrated this passage into the Southern Hemisphere almost 14hours ahead of the time they were aiming to beat. No excesses but making the most of what they had on board, “we had a drink together and raised our glasses,” explained Francis Joyon, quite pleased with his express first stretch of the Jules Verne Trophy, which involved diving down the North Atlantic. “It’s fantastic. We’ve had a great race so far. The crew and the boat have both done very well. Due to a lack of time, we didn’t have much time to train in rough conditions and we discovered a lot. I’m really pleased.”

All of the sailors on board had already crossed the line separating the two hemispheres at least once before. But at a very different speed. Gwénolé Gahinet: “It’s a great pleasure, of course. This is the second time I have crossed the Equator. The first was back in 2011, in a series boat in the Mini Transat. That was a fine moment too, as I was the first one out of the Doldrums and I was over the moon. This feels like that all over again but much faster… five times as fast!”

So, that’s one thing out of the way. With a lead of almost 14 hours and with the gap widening over the record pace (266 miles at 1400hrs), everything is going well. Particularly as the conditions are much more stable (trade winds blowing between 13 and 20 knots this lunchtime) and more pleasant conditions than in the Doldrums. Gwénolé Gahinet, again: “The conditions are quite pleasant, brilliant sunshine, fairly calm seas and a SE’ly wind that isn’t that strong, but it’s nice out here.” To be honest, the crew wouldn’t mind a little more wind… “Or maybe we should ask our technical director to bring us the big mast(IDEC SPORT has two and deliberately set off with the smaller one, which is lighter – editor’s note) “ joked Francis Joyon. “But I had a look in the rule book and you’re not allowed to change the mast during the race (laughs). Having said that, we were quite happy with our small mast in the northern part, It was the rig we needed and we got through it well. We know too that it will be a great help in the Southern Ocean, so before that we have to adapt to the situation.”

In joking mood and sounding upbeat, as you would expect from someone, who has escaped from the clutches of the Doldrums… all lights are green. What they have to do now I find the best route to get to the Cape of Good Hope at the tip of South Africa. In order to achieve that goal, they are trying to time it right to hop onto a series of low-pressure areas moving away from South America. Today, they don’t have much else to think about other than speeding south as quickly as possible. However, Marcel (Van Triest, the router) has warned us that there is an area of uncertainty between 10 and 20 degrees South. “On the charts, it is looking good, but in reality out on the water, it risks being more complicated. We may get into calms with lots of manoeuvres to carry out to make our way south.”

Time for a breather before the transition

As for life on board, there are no worries either and the crew is doing well. “Of course, there was a little bit of tiredness as we made our way through the Doldrums, where the watch schedule fell to bits. I spent the night awake and the lads missed out on some of their rest periods too. But last night, we were able to recuperate. We charged up our batteries and we’re all in good shape and feeling good. We made a nice little video as we crossed the Equator (broadcast on Breakfast TV in France), where we raised out glasses to Neptune. I haven’t seen the finished version, but I raised my glass.”

They are the latest developments for the sailors aboard IDEC SPORT, sailing a long way off the coast of Brazil. Another hurdle lies ahead with the transition zone to get through. The next big moment will be crossing the line to the south of the Cape of Good Hope, marking their entry into the Indian Ocean and the huge open expanse of the Southern Ocean, which is part of the legend of round the world racing. We don’t need to panic, if IDEC SPORT is a bit behind the record pace at that point, because of the uncertainty in the South Atlantic. “We’re not forgetting our main goal,” Francis Joyon reassured us, “what counts is the time at the finish, not the intermediate ones.” So that is clear.

. Deadline
To smash the Jules Verne Trophy record, IDEC SPORT has to be back across the line before 1544hrs on Wednesday 6th January.