The IDEC SPORT maxi-trimaran skippered by Francis Joyon and his crew crossed the finish line for the new record between Ho Chi Minh City (Vietnam) and Shenzhen (China) last night at 2324hrs UTC. They sailed the 844 miles of the theoretical course in 2 days, 20 hours, 28 minutes and 51 seconds, averaging 12.3 knots.

After the Mauritius Route record set between Brittany and Mauritius, then the record between Mauritius and Vietnam, this latest route was the third Act in the programme of records referred to as the IDEC SPORT ASIAN TOUR, which the winner of the last Route du Rhum has been engaged in since Saturday 19th October.

In 36 days of sailing, Francis Joyon, his son, Corentin, Antoine Blouet, Christophe Houdet and Bertand Delesne have just covered more than 17,000 miles out on the water making their way down the North and South Atlantic, crossing the Indian Ocean, the Java Sea and the South China Sea. The crew and their mighty maxi-trimaran, IDEC SPORT will now be giving themselves a well-deserved break, before tackling the Hong Kong – London record in mid-January 2020 on the famous Clipper Route, which will bring them back to Europe. 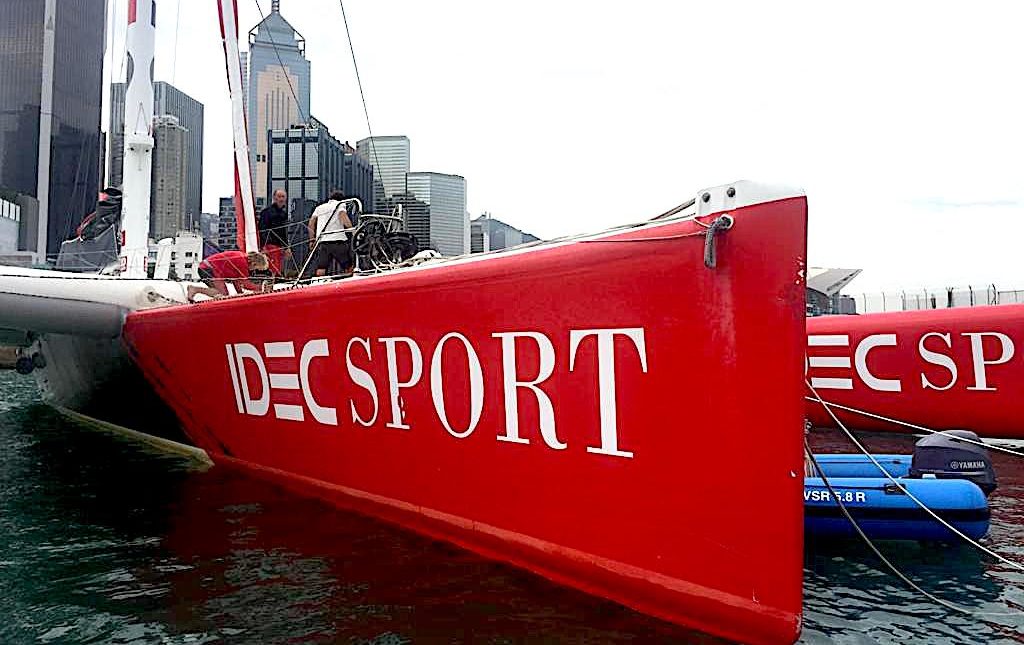 “If we add together the times for the first three Acts of the IDEC SPORT ASIAN TOUR, with 20 days for the Mauritius Route, 13 to reach Ho Chi Minh City and 3 days to get to Shenzhen, we reach a total of 36 days of racing altogether, or in other words the record time set by Giovanni Soldini in 2018 on the route between Hong Kong-London, which is our next challenge!” Francis Joyon is rightly extremely pleased with his long voyage which began on 19th October from Port Louis in Southern Brittany. He finished last night the third of the four Herculean tasks, when he reached the Pearl River Delta separating Macao from Shenzhen and the line marking the finish for this new record. This was the shortest, but also physically the hardest of the three challenges.

“The boat has been through some harsh conditions, but for 36 hours, she was punished like never before,” admitted Francis. “With headwinds in excess of 35 knots on nasty seas, she kept slamming violently in the steep waves. We were well and truly shaken up and the finish near the many little islands blocking the way to Shenzhen was a huge relief for all the crew. Fortunately, the sea gradually calmed as we made headway and the wind veered to our right a little to offer us a more comfortable finish with the wind on the beam from the East-North-East. Thousands of fishing boats, a bit like off Vietnam, were busy in these waters with their long fishing lines spread right out. It was an amazing sight! We are pleased to have finished. For almost two months now, we have been focusing on the boat and a little break will do us the world of good, before we tackle the Clipper Route and the record held by Giovanni Soldini in January.”

After a quick visit ashore and a decent meal, Francis and his crew of four immediately got back to work. “The aim is to carry out as thorough a check-up of the boat as possible,” explained Francis. “Christophe and Bertrand are carrying out an inspection by tapping the three hulls. By tapping, they will be able to see whether there is any internal damage. Corentin is at the head of the mast inspecting all the attachments, while Antoine is doing the same inside the mast.” As any good sea captain, Joyon wants to make sure his trimaran is in good shape, before flying home later this week with the crew to France, where he will spend the festive season.

Coming up in mid-January another huge adventure, the Clipper Route from Hong Kong to London, this time without any stopovers, but once again with a crew and in record mode.