IDEC SPORT’s slow down during the night, (earlier today back in Europe) had been expected since they passed south of Tasmania. Francis Joyon and his boys reacted calmly without any changes to their watch pattern, as they wait for a temporary strengthening of the SE’ly wind, a precursor to another tricky patch to come this evening in the centre of the area of high pressure. Once past this final hurdle, IDEC SPORT should pick up speed once again. Joyon, Surtel, Pella, Stamm, Herrmann and young Gahinet can’t wait to get back to the level of performance, which saw them cross the Indian Oceanin record time. The clock ticking is still the obsession on board. It is still possible for the big, red trimaran to equal or be close to the time it took Loïck Peyron and Banque Populaire V to get to the Horn. We can be certain that Joyon and his troops will do their utmost to get the boat back to the high speeds we have come to expect from this machine sailed by such skilful sailors, once the SW’ly wind has appeared. 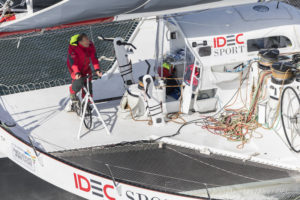 The sailors on IDEC SPORT have just had a tricky night in the Southern Ocean. Alex Pella, Francis Joyon, Gwénolé Gahinet, Bernard Stamm, Clément Surtel and Boris Herrmann all have one thing common, their hatred of light conditions. While he still has that calm exterior, which he admits he does not feel himself, Francis Joyon didn’t get any sleep during the night, preferring to let his sailors rest within the watch system they have had since the start back in Brest. “The sails are flapping and IDEC SPORT, because of her wide beam drags her feet when the wind drops to below 5 knots, as happened during the night,” explained Francis. “We continued to head south in a light SE’ly wind, so have been sailing upwind. That point of sail isn’t a problem in itself, as the seas are smooth, but it has been a stressful time, as in record mode, when this happens, you begin to wonder whether it is possible. We are now accelerating again as we expected in our battle plan and we are heading for another area of light conditions we will be crossing this evening. This should be the final hurdle, before we pick up the SW’ly winds which will take us to Cape Horn.” Remaining confident in the scenario imagined ashore by Marcel van Triest and in collaboration with the crew, the men on IDEC SPORT are remaining fully focused, watching any changes in the sky and wind. “We can see a patch of blue sky in the distance, proving that we are changing weather systems,” added Francis. The conditions are certainly not rough, far from it, but this does mean that over the past few hours, the sailors have had a good opportunity to get some rest and recuperate. The crew of IDEC SPORT will have the bit between its teeth when they cross the deep southern latitudes towards the Horn.

Alex Pella remembers sailing near the Balearics a few years ago on the King of Spain’s boat along with Marcel van Triest. The Dutchman is experiencing the adventure this time from ashore, following a watch routine that he has set himself. It is him, in conjunction with Francis, who drew up the strategy to get across the Pacific Ocean, which isn’t as willing as to be taken advantage of, as her Indian neighbour was.

“Today we are carrying out a plan developed as they sailed to the south of Tasmania,” explained Marcel. “The strong winds are a long way south and to reach them, we would have had to dive down to 55 degrees south on the edge of the pack ice. There was no way we could do that, so we had to accept a compromise, which is always tricky. We had to get around the first obstacle, a small area of low pressure, via the north. That is what we did yesterday. Today, we shall be tackling the second obstacle on our route towards the main southern air streams, and this time that means dealing with a high. IDEC SPORT will be slowed down again, but we hope it won’t be for too long. We will then have to carry out a change of tack and it will be straight on to the Horn. IDEC SPORT should be back with high speed sailing, allowing her to round the Horn in about the same time as Loïck Peyron took in 2011.”