“We are choosing the least bad option. We are dragging our feet a bit tacking downwind. We are still to the north of what remains of the area of low pressure, hoping that something will develop along the way.” Francis Joyon and his merry band are relying on their professionalism and their knowledge of the sea to make the most of the light conditions, which stretch out along their route to the southern tip of Latin America.

Focusing on their trimming, by gybing they are hoping to compensate for the lack of power of the IDEC SPORT maxi trimaran in these light airs. Her mast is well suited to the strong conditions in the far south, but means they are lacking that vital horsepower, when the wind drops below ten knots. A frustrating situation for sailors, who are looking for mind-blowing speeds, like Joyon, Stamm, Gahinet, Pella, Herrmann and Surtel. They are carefully planning ahead for their manoeuvres, paying special attention to the slightest movement at the helm, studying any minor changes in the direction of the wind, but their joy is certainly contagious.

Feeling their way towards the exit… 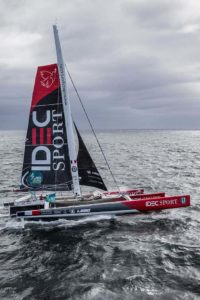 “The bright sunshine of the Southern Ocean cheered the crew up yesterday,” explained Francis Joyon. “We managed to recharge the batteries – for the boat and the men. We need sunshine for our solar panels, but it was also excellent for us, as we were able to dry our clothes and forget the dull weather of the past few days.” IDEC SPORT’s dash has been interrupted after the incredible pace she managed to maintain from New Zealand. She is now making her way towards the SE, which requires a series of gybes, as they search for the least crippling route through the calm patch ahead of them, which is blocking their route towards Cape Horn. “We shall continue to weave in and out for most of the day,” added Francis, “trying to keep up a bit of speed. IDEC SPORT is a bit like a big 4-wheel drive. She does really well in heavy conditions, but suffers a bit, when the wind drops off and the sea is calm.”

The exit from this area isn’t that far off, but the way to get there is constantly changing, meaning that the day ahead of them is rather uncertain. The main weapon the six sailors on IDEC SPORT have is their ability to react quickly, as the boat doesn’t demand too much of them, when changing tack, with the current sail, the big gennaker, in place now for more than forty hours.

Bernard Stamm came up with an idea adopted by the crew and unbeknown to Francis Joyon. They have invited us to a Round the World quiz. The most Breton Swiss sailor invites you to discover the title of a hit song in a short story he tells in a video. We need the name of the singer and the title of the song. Bernard will give us the answer himself tomorrow at 1400hrs UTC. The winning entry will be drawn out of the hat among those with the right answer. Francis was surprised to find out that you can win an IDEC SPORT cap signed by the man himself.

Just visit the facebook page https://www.facebook.com/FrancisJoyon.IDEC, or the app https://www.idecsport-sailing.com/suivez-le-tour-du-monde-de-francis-joyon-sur-votre-smartphone/