“We’ll see what happens at the Equator.” Pragmatic and realistic, Francis Joyon and his crew of five are taking each difficulty as it comes. The one that they have been dealing with for the past couple of days is associated with the huge area of high pressure blocking the South Atlantic at the latitude of Rio, destroying the dream position IDEC SPORT took up in the east after rounding the Horn.

The maxi trimaran has since sailed close to the wind, a point of sail hated by sailors and three-hulled machines, which is both uncomfortable and especially not very profitable in terms of making gains towards the finish. There is now light at the end of this tunnel and Francis hopes to pick up some more wind this evening. The wind shifting to the east should allow the big, red trimaran to accelerate and make good headway towards the Equator, which will be when Francis, Guéno, Boris, Alex, Bernard and Clément can really see the state of play in this Jules Verne Trophy attempt after the expensive toll they had to pay in the South Atlantic. 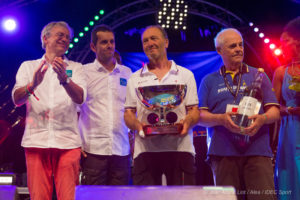 It was another uncomfortable night on IDEC SPORT, which continued on the port tack on the edge of the St. Helena high. A bumpy old road, where they were slowed down heading into a very light NW’ly. At around lunchtime, Francis and his troops changed tack and carried out what they hope will be one of the final manoeuvres before reaching the trade winds. They will sail on a long tack northwards to get to the Equator as quickly as they can. At that point they will be able to judge how much of a penalty charge they had to pay in the Southern Hemisphere after all the hurdles they have faced in recent days. The extent to which the St. Helena high has expanded westwards has certainly not been kind to Francis and his crew. “We were hoping to gain an advantage from our positioning off to the East after the Falklands,” admitted Joyon, “but we had to head back west to avoid being becalmed, which meant sailing upwind in a northerly flow along the coast of Brazil.”

As enthusiastic as ever

Far from abdicating at this point, and in spite of the clock ticking, the men on IDEC SPORT are continuing to give it their all. They remain as enthusiastic and determined as ever, which is something they can be proud of after all the work done over the past 38 days by all six of them on a boat designed for ten. They have sacrificed rest and sleep to ensure they have been getting the most out of the boat. “The boat is in perfect condition,” Francis stressed, before praising his crew for their vigilance over the past few weeks. “The South Atlantic wasn’t on our side,” he said smiling. “Let’s hope the North Atlantic will allow us to finish this round the world voyage in style.”