As they announced yesterday, Francis Joyon and his crew passed close to St. Helena and were able to catch sight of the cone shaped island reminding them of Napoleon’s hat. Today, (Thursday 6th February), IDEC SPORT is continuing at good speed her climb back up the South Atlantic taking advantage of a SE’ly air stream. 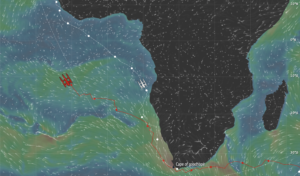 Sailing at between ten and fifteen degrees South at the level of Angola, the crew are focusing on finding the best way to tackle the Doldrums, the Inter-Tropical Convergence  Zone separating the two hemispheres, which is usually very unstable. On their twentieth day of sailing, IDEC SPORT has a lead of around 700 miles over the Tea Route record and her virtual rival, Giovanni Soldini’s trimaran Maserati, which holds the reference time.

Photo: the island of St. Helena in the background © Bertrand Delesne / IDEC SPORT 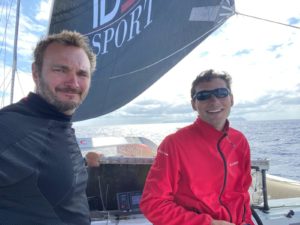