After setting sail on Saturday morning from Ho Chi Minh City in the south of Vietnam, the IDEC SPORT maxi-trimaran may reach the finish line of this new record to Shenzhen (China) tomorrow morning at dawn European time. This unusual route for an ocean-racing sailboat, which on paper is 870 miles long, presents a series of difficulties for Francis Joyon and his crew comprising his son, Corentin, Antoine Blouet, Christophe Houdet and Bertrand Delesne, who have coped perfectly well so far, and may well be finishing in advance of schedule. 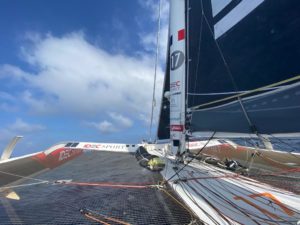 Sailing mostly close to the direction opposing the winds into the powerful NE’ly monsoon with its choppy conditions and steep waves in the heart of the Paracel Islands, a disputed territory, Francis and his men have done remarkably well and can look forward to an early finish to this third Act of the IDEC SPORT Asian Tour, sailing on a single tack straight towards Shenzhen between Hong Kong and Macao.

“Yes, we were a bit faster than planned,” said Francis Joyon, who admits he is pleased to have got away from the difficulties of the first 36 hours of dangerous sailing after the start from the Vietnamese coast. “We had to carry out more than twenty changes of tack along the coast,” he told us. “Our idea was to avoid the stronger winds offshore. In spite of that, we had to deal with sailing upwind in more than 35 knots. The boat slammed a lot in heavy, choppy seas. The sky was very grey and dull and in the reduced visibility we had to zigzag around all sorts of traps, a lot of fishing boats, nets that were drifting and a lot of small lights which we didn’t identify as a boat or an island. It was a bit stressful. Since then, we changed tack and headed east, before going back on the starboard tack to head due north towards China. It is looking a bit brighter and we caught sight of the sun today.”

This third Act of the four making up the IDEC SPORT ASIAN TOUR, the shortest since they left Brittany, is also the slowest and physically and mentally the most demanding.” We can’t wait to be heading for Europe on the attempt at the Clipper Route record between Hong-and London,” added Corentin Joyon. “The boat is suffering upwind, although slamming a little less today, as the wind and seas have eased off. IDEC SPORT is designed for speed and the record to London should enable us to get back up to the high speeds we experienced in the Atlantic and Indian Oceans. I am discovering some mysterious horizons. Everything here is different, the sea, the smells, the colour of the sky. It is a fascinating experience that I am able to share with a very friendly crew. Sailing close to all these islands along the route to Shenzhen looks very interesting.”

IDEC SPORT is expected to cross the line off Shenzhen during the night. They will then head for a marina in Hong Kong to start to prepare the long return voyage back to Europe, during which they will be attempting to smash the legendary Clipper Route record between Hong Kong and London.

VIDEO OF THE START FROM HO CHI MINH CITY