The six sailors on IDEC SPORT are entitled to a special meal for Christmas Eve, while remaining focused on their main goal, which is finding a way to get around the St. Helena high. At the same time, they are having to be extra cautious as large icebergs have been spotted in the area where they will be sailing.

“What have we asked Father Christmas for? A good crossing through the area of high pressure. It’s far from certain and that’s why we’re asking him for that big present. Apart from that, we’re in decent winds of around 35-40 knots. We have taken in a reef in the mainsail and are sailing quickly.” With a calm, yet upbeat voice, Francis Joyon summed up well the situation for Christmas Eve: IDEC SPORT is sliding downwind at high speed. They will be “gybing in a few hours to get back on the direct route. We’re trying to get in place in relation to the high, which is hindering our passage towards the north.” The good news is that they should be able to stick with the wind from the low-pressure area for some time. “We should stay with it for 800 or 900 miles,” explained Francis, “After that, we will have to find a way to reach the trade winds on the other side of the high.” With Joyon, it always sounds so simple…

A 4-mile long iceberg ahead

We must not forget that they are still in the Furious Fifties, and even if it seems odd that as they are making their way north, there is a real risk of encountering an iceberg today and tomorrow. The router, Marcel Van Triest warned the crew about this. Francis Joyon tells us more, “Our route will take us in amongst the icebergs, even though we are quite some way north. These are icebergs that have drifted a long way from the Antarctic. There is one ahead of us that is 4 miles long. It can be seen on the satellite photos, as it is so big. We shall be approaching the area where icebergs have been spotted. The big one is about 700 miles away and we should pass close to it tomorrow. The sea state? Behind the area of low pressure, it is starting to build and there are white tops with foam. It is still very much a Southern sky with the sea birds.” That is what life is like aboard IDEC SPORT this Christmas. 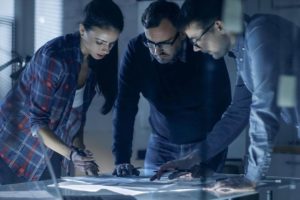 As for the Christmas Eve celebrations, “We don’t have that much due to weight restrictions, but Boris brought a long a flashing star that must weigh about 15g and changes from green to amber to red. That is the only decoration I’ve seen for the moment,” smiled Francis, before adding, “Oh and just now, Boris was at the helm with a Father Christmas hat on in 40 knots of wind. It was a bit different.” After Francis, we tried to find out more from Bernard Stamm, as he is charge of supplies. So what’s on the menu this Christmas? The Swiss sailor told us the main course was “a bean stew with meat, a ‘cassoulet’. This canned meal is very filling and makes a change from the freeze-dried stuff. After that, there is a little surprise: portions of raspberries in Guinness, which is something new to me, I wanted a surprise too! And the lads don’t know yet, but I have two excellent bottles of red wine that I didn’t get through with Jean Le Cam in the Barcelona World Race.”

That’s the type of guy we like. He takes a mini wine cellar around the world with him, allowing the wine to mature along the way. But this wine is nevertheless in “plastic bottles, so as not to weigh too much.” That should give a nice boost to what is already a friendly atmosphere on board, in spite of the uncertainties about the weather and the infamous high that is hindering their progress. Eyes wide open for icebergs, fast sailing as they try to make their way north, while everyone is enjoying themselves on board during this amazing adventure. As for the numbers, they now have to sail 500 miles a day in terms of distance towards the finish to make it home in record time. And they are still quite rightly aiming to do just that.