With four days and a few hours to go to the record time for the Trophée Jules Verne, and with 3000 miles left to sail in the North Atlantic, Francis Joyon, Clément Surtel, Gwénolé Gahinet, Alex Pella, Bernard Stamm and Boris Herrmann have very little chance now of finishing before the deadline of 1644hrs on Wednesday 6th January. The men on IDEC SPORT, caught in a patch of calms for three days off the coast of Southern Brazil have accepted that, but show no regrets. Quite the reverse.

The desire to get to Ushant as quickly as possible remains intact as they pay attention to getting the trimming just right, steering precisely and getting the best route possible. They still have a few targets to aim for, starting with the desire to beat the reference time between the Equator and Ushant of 6 days, 10 hours and 44 minutes held by this very boat, when she was in the colours of Groupama 3 and this new challenge seems to be motivating the crew on the big, red trimaran. Then, there is another target, which is important too for these born competitors. The maxi trimaran Spindrift 2 is 550 miles to their north-west, but only 350 miles closer in terms of distance to the finish. This and other elements mean that there is still a lot of excitement in this final week of the Jules Verne Trophy.

Getting around the high 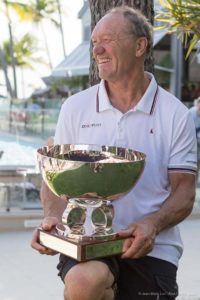 IDEC SPORT stepped up the pace again this morning entering into the steady NE’ly trade winds where there is a swell in the opposite direction banging the boat and men around. “With the wind on the beam and a swell head on, life on board is quie challenging,” said Francis Joyon. “You really have to hold on to move around the deck or inside. But the temperature is pleasant and the boat is sailing quickly.” They have been through all the headsails as the wind has got up from the big gennaker to the J2, the hybrid sail, which can be used downwind or when close reaching. “This morning, we have a bit too much sail up,” added Francis, revealing the determination of his crew on IDEC SPORT. “Conditions in the North Atlantic should allow us to be very quick with this trade wind taking us to the west of the area of high pressure blocking the direct route up the Atlantic off the Canaries. We should get some lighter downwind conditions, which will allow us to get to the low-pressure areas moving in from the west. It looks like being a very windy finish off Brittany.”

IDEC SPORT would like to get a new record on this final stretch in the North Atlantic and improve on the record set by Franck Cammas on Groupama 3, and maybe even get back up with Spindrift 2, the maxi trimaran, which smashed the record, when she was in the colours of Banque Populaire V, and which has been a sparring partner for them since the start on 22nd November. “As a Figaro racer, who has never attempted the record before, the presence of Spindrift 2 meant that this was no longer a virtual challenge,” Gwénolé Gahinet explained. “Whenever you have a rival out on the water, you always want to finish ahead…”