What a great result at Mado Bonnet. The Lionesses did well in front of their home crowd and evened out the score in the EuroLeague by beating Girona 89 to 67.

The Lionesses did well in their historic first match in the women’s Euroleague, after leading 50-33 against Girona at half time. Although the Spaniards got back in the game in the third quarter (won by Girona 18 to 20), Valery DEMORY’s team reacted well by hammering things home in the final quarter. Focused and determined, the Lionesses made their supporters happy on Thursday. Making progress with their defence and attack, they put on a great show at Mado Bonnet. The Lionesses have evened out the score in Europe after losing in Russia to Kursk. 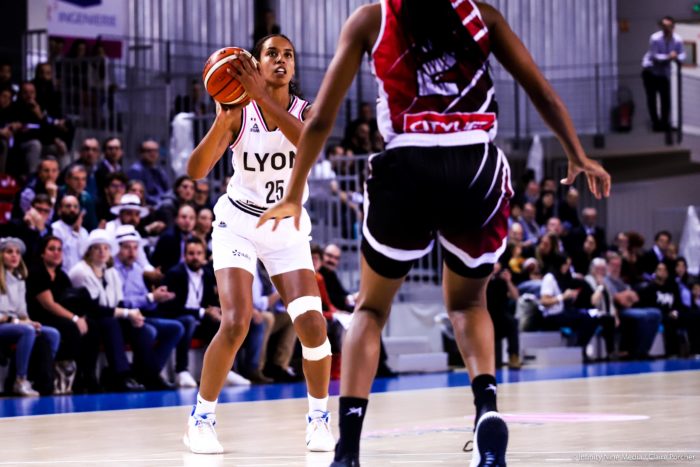 THE BIG MOMENT – Thanks to a strong squad, the Lionesses started the match well. A very aggressive defence stifled the Spaniards and on the attack they shared the ball around. With the score at 50-33 at the break, they were already well on their way to victory.

THE TOP LIONESS  – With seven players (out of the eight professionals) with an evaluation above 10, this was a real team win. But let us give a special mention to Julie ALLEMAND who along with her eight 8 points (4/5) handed seven brilliant balls to her colleagues.

STATISTICS  – With 22 decisive passes, the Lionesses won over the supporters at Mado Bonnet on Thursday.

DECLARATION  – “We need to avoid getting beaten at Mado Bonnet. We have the pace. I’m pleased to see the team like this at home, as they gave it their all. The gap is important because we dream of doing well in the EuroLeague. To continue to dream, we need to show the other teams that we are there and build up respect through how we play.” (Valery DEMORY)

NEXT – The Lionesses will be home again at Mado Bonnet on Sunday when they play Bourges (4.30) on the first day in the LFB championship (postponed match).