“Our final week looks very exciting.” That was how the youngest member of Francis Joyon’s crew, Gwénolé Gahinet, summed up the situation on 1st January, as he celebrated his 32nd birthday at sea. More than the little gifts from his fellow crewmen, the most important thing for him was the fact that he was out there competing on a maxi multihull in this incredible challenge. The atmosphere remains joyful and festive on IDEC SPORT, back at speed for the final amazing dash home.

Having regained almost 600 miles in two days from the Jules Verne Trophy record holder and more than 400 from their rival out there on the water, the maxi trimaran Spindrift 2, Joyon and his men have shown once again the quality of their boat and their determination to push hard in any wind they manage to get. Due to cross the Equator later this afternoon, IDEC SPORT will be tackling the final tortuous stretch back to Ushant with some strong NE’ly trade winds, a well-established Azores high and a series of lows in the North Atlantic, which are looking oparticularly violent. A great way to finish this fast race around the world after everything that has happened.

Work being done on the mast

“This isn’t the first time this has happened to us during the dash around the world, but we are going to have to carry out some work on the mast to repair a damaged mainsail car.” Francis Joyon went on to explain to us that apart from a weakening easterly wind, as they approached what is more or less the Inter-Tropical Convergence Zone, the speed of the big, red trimaran, which has been so high for 48 hours will be dropping in the coming hours, when the crew brings down the mainsail to make it easier for Clément Surtel to work on the mast and damaged car. 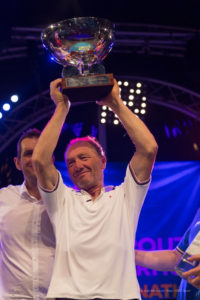 They have been celebrating the New Year and young Gwenolé’s birthday, so in spite of the slowdown, the crossing of the Equator is seen as a major moment in this round the world voyage. IDEC SPORT, so cruelly punished after rounding the Horn, is finishing off the South Atlantic at cannonball pace as they climb back up the coast of Brazil. “Thirty knots or nothing,” as Joyon’s troops have named her has lived up to her promise and regained 600 miles in just two days from the record-holder, Banque Populaire V, meaning the gap has been cut to 750 miles from the 1350 they recorded on Wednesday morning. The big gennaker will shortly be replaced by the solent, to advance with a NE’ly wind on the beam, although there is still the option of cutting across by sailing close to the wind. It is of course, how they get to the westerly winds that will determine the final time. Slow moments, periods of acceleration, strategic changes of tack, a stormy finish…the 2015-2016 Jules Verne Trophy, in which they have 3300 miles left to sail, still has a lot up its sleeve.