After sailing more than halfway around the world from West to East from Brittany to China via Mauritius  and Vietnam, Francis Joyon and his crew will shortly be heading west on their long return voyage back to Europe. The fourth and final Act of the 2019-2020 IDEC SPORT ASIAN TOUR programme of records will begin in a few weeks from now in Hong Kong with almost 15,000 miles to cover to reach London, following the route taken by the tea clippers. We look back today at this legendary voyage, where commercial rivalry back in the nineteenth Century led to the first races between sailing ships… 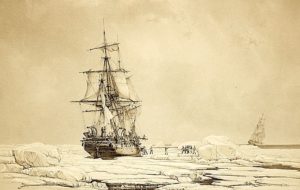 19th Century.
The leaps forward in technology enabled sailors to explore the world right down to the most hostile limits in the South and North. The French explorer, Dumont d’Urville sailed around the world three times in twenty years, discovering and charting 150 islands and 2500 miles of undiscovered coasts. The vast expanses of the ocean separated the colonies and trading posts, leading to a round the world voyage with a series of stopovers. Commercial rivalry between countries led to a generation of large sailing vessels, called clippers, which like the three-masted vessels in excess of 180 feet in length, the Flying Clouds and the Cutty Sark, raced around the world on all the major shipping routes. The pride of the sailors and the reputation of the companies in addition to the economic consequences led to sailing ships that were increasingly powerful and crossed the oceans more and more quickly.

It was in this context that the Clipper Route or Tea Route, which led to the first sailing races, was born. In the nineteenth Century the American and British clippers became engaged in merciless battles to be the first to bring home to London their precious cargo of tea. The first to arrive back in the capital was able to determine their price for the tea and get the best price for their cargo…

In 1866 the famous Tea Race took place with nine clippers battling it out between Hong Kong and London. According to legend, the Taeping (photo), a three-masted vessel measuring more than 180 feet, fought a legendary duel with Ariel, another clipper of the same size over the 15,000 mile trip back to Europe. This race over time became a tradition in the tea trade between the United Kingdom and China. The winning boat would get a bonus for each ton of tea delivered and their captain obtained a percentage of the boat’s profits. In the end it was Taeping, which won by a few minutes, by being the first to unload their cargo of tea in the docks in London. The famous Cutty Sark, a three-masted vessel measuring more than 200 feet would also enter the history books concerning the Clipper Route, before the Suez Canal opened in 1869 and the arrival of steam ships marked the end of the era of the great sailing vessels.

The arrival of modern racing yachts

We had to wait for more than a century to see more races by sailing vessels over the Clipper Route. Unlike the heavy clippers of the nineteenth Century, these were light and powerful multihulls. While they measured a third or half the size of the 19th Century clippers, their speed was two or three times as fast. While the fastest of the old sailing ships took more than three months to cover the 15,000 miles between Hong Kong and London, the current record for the Clipper Route is held by the Italian, Giovanni Soldini aboard his giant trimaran, Maserati, with a time of just over a month (36 d 2 hrs and 37 mins).

The first sailor in the modern era to tackle the Clipper Route was Frenchman, Philippe Monnet, who set the first reference time in 1990 (sailing solo) between Hong Kong and London aboard his 55-foot trimaran, Elle & Vire (with a time of 67 d 10 hrs 26mins). Monnet’s record was only beaten ten years later (in 2008), by Lionel Lemonchois and the crew of the maxi-catamaran, Gitana 13 (with a time of 41 d 21 hrs 26mins).

Finally, the Multi 70, Maserati skippered by the Italian, Giovanni Soldini has held the Clipper Route record since 23rd February 2018 with a time of 36 days, 2 hours and 37 minutes crossing the finishing line under the Queen Elizabeth II bridge. The crew of the Italian trimaran included Guido Broggi, Sébastien Audigane, Oliver Herrera Perez and Alex Pella. They covered the 15,083 nautical miles averaging 17.4 knots… 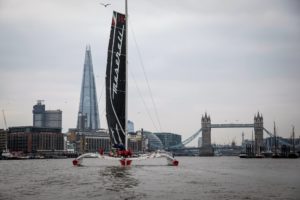