The IDEC SPORT maxi trimaran crossed the International Date Line at lunchtime (UTC) today, and thus re-entered the western hemisphere. They passed New Zealand this weekend and that is now but a misty and cold memory. Joyon and his men can now let their imagination go wild about the Antipodes and Bounty Islands, which are close to the boat. Still out of breath after their amazing dash down under Australia, the crew is remaining focused on the traps that lie ahead in the Pacific Ocean, which does not look very cooperative.

Today, IDEC SPORT crossed the International Date Line, the semi-circle extending from the two poles on the opposite side of the world from the Greenwich Meridian. The dials on board the boat are now indicating degrees west, signifying that the six sailors are now on their way home. On their radar screens this morning, they caught sight of a real rival, the Maxi trimaran Spindrift 2, which is also out there competing for the Jules Verne Trophy. Side by side after sailing 14,000 miles, they came close to each other for the delight of the crew, pleased to be up there with the boat that holds the record with her crew of 14. 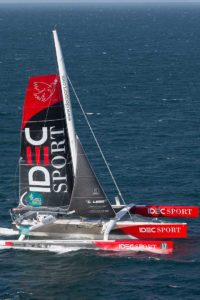 The shape that appeared this morning on the radar was quickly identified as that of the maxi trimaran, Spindrift 2, the former Banque Populaire V, the current Jules Verne Trophy record holder. This seemed like a gift rewarding the efforts of the crew of IDEC SPORT. After what has been an exceptional week, including two intermediate records, the Indian Ocean record and the record between Cape Agulhas and Cape Leeuwin, Francis Joyon commented, “We had a rather difficult night with the boat suffering when she slammed into the water. It was quite violent. Finding out that Spindrift 2 was so close was really pleasing. She arrived from starboard and we were coming from port in the mist. The boats are very different. Sometimes, Spindrift does better than us, and sometimes it’s the reverse. IDEC SPORT likes strong winds, because she is light with her sail centre much lower down.”

No sunshine for 9 days

“We haven’t seen the sun for 9 days. I don’t think I ever experienced that before during my previous round the world trips, “explained Francis Joyon on the radio link-up this morning. Holder with IDEC of the solo round the world record, Francis always offers us a look of amazement when relating his incredible adventures. “Since Heard and the Kerguelens, we have passed some of the most remote islands on the planet with the Antipodes and Bounty Islands close to us today. But we haven’t been able to see them, as the mist remains as dense as ever.” Conditions on board the IDEC SPORT trimaran, still doing more than 30 knots, haven’t really improved as they have moved backup to beyond 48 degrees south. “On board, we still have to wear our hat and gloves,” he added. “We are not using the heater inside, as we need to save energy.”

The long route towards the Horn 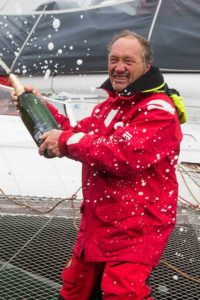 In constant contact with his onshore router, Marcel van Triest, Francis Joyon is not too pleased about what the Pacific will offer. “There are several routes possible to reach the Horn. The Great Circle Route remaining north of the lows, or a shorter route, which is faster, but which takes us down into the ice. We are hesitating about that…” The uncertain movement of a huge area of high pressure is limiting the short term strategy, and for the moment, the men on IDEC SPORT are dealing with two areas of low pressure moving eastwards. “In theory, we have two distinct options,” explained Francis, “Either getting around the high via the north which will mean diving south again later on to get around the Horn which is at 55 degrees south, or being a bit of a daredevil and heading south on the edge of the Antarctic.” So it is not looking simple or pleasing, and patience is the only real option for the time being, hoping that the situation will evolve favourably in the coming days. Meanwhile, the small low-pressure areas they are dealing with today and tomorrow should enable them to get back to the direct route.