Francis Joyon’s crew regained another fifty miles during the night following four successful gybes in the Furious Fifties. IDEC SPORT is sailing a long way down. At more than 53 degrees south.

We must not forget that the planet is round. This means that each tack IDEC SPORT makes towards the south shortens the voyage to Cape Horn, which is still an ocean and a half away. Already way down in the Furious Fifties, IDEC SPORT has gybed four times since yesterday afternoon: at around 1500hrs, 1715hrs, 2330hrs and 0200hrs UTC. These four manoeuvres mean they are weaving around the Great Circle Route (the shortest theoretical route). In other words, on two occasions for just over two hours, Francis Joyon and his men turned southwards. On the one hand to keep as much wind as possible and to keep a good angle to the wind allowing them to sail quickly downwind at more than 30 knots. 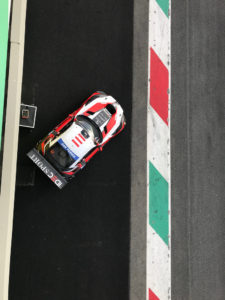 Because the Earth is round, the icing on the cake of these tacks southwards is that the VMG (Velocity Made Good) is bound to be high. An example? At 2200hrs yesterday evening, on a bearing of 75 degrees (towards the NE), IDEC SPORT was sailing at almost 30 knots, but their VMG was only 19 knots. Three hours later, at the same speed but on the other tack (bearing of 140° towards the SE), their VMG was 30 knots. The result of this tacking in the Furious Fifties has been excellent for the past 36 hours. Another fifty miles were regained during the night from the record pace and IDEC SPORT’s deficit has been significantly cut. On Sunday, it reached 800 miles, but this morning is down to 550 miles.

Regaining 250 miles in such a short time – or a third of the deficit – is bound to be a boost for Francis Joyon and his crew of five. We can imagine them fighting hard against the polar ice in the Indian Ocean, with an eye on the radar and the other on the sea to detect any icebergs, then gybing and speeding along at 30 knots in the dark of night. Above all, we should not imagine that this is plain sailing. “Our route is going to take us a long way south. We may go down to 54°,” Francis warned us yesterday morning. At 0500hrs this morning, the GPS on the boat was indicating 53°20…