For their first race of the season, the Dubai 24-Hour Race, the IDEC Sport Racing team went through every emotion on Friday and Saturday. Twentieth on the starting grid on Friday, but forced to stop to carry out repairs for almost two hours, Patrice and Paul Lafargue, Gabriel Abergel and Frédéric Yerly finished this race against the clock in 26th place overall and fifth in the A6-AM category after an incredible comeback… 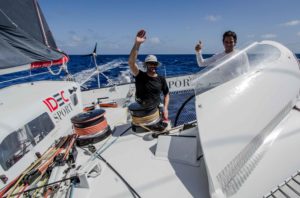 They are going to remember this season’s opener for a long time in the 24 Hour Series. Porsche 997 champions last year, (the Trophy was handed to the team at the opening gala for this 2016 season), Patrice Lafargue’s men discovered at the end of the season last year the upper A6-AM category aboard a Mercedes SLS AMG GT3 belonging to the Swiss team AnTeam. The way they adapted to this new car was very promising, as seen by their twentieth place (out of the 98 cars at the start) on Thursday in the qualifiers, which led them to hope for a race up with the frontrunners. However, after Frédéric Yerly got off to a good start, n°17 stopped on the edge of the track, suffering from electronic problems. Towed to the team’s stand, they were held up for over an hour, but once underway again, they were forced back to the stand, this time with brake problems.

In all, they were stopped for over two hours and set off again at the back of the grid… in 93rd place after 4 hours of racing. The amazing comeback then began, as night fell on the Dubai circuit: 85th two hours later, the Mercedes was up to 70th at the halfway stage, 53rd after 15 hours, 34th after 20 hours, 30th at the last handover from Patrice Lafargue, with Gabriel Abergel speeding in the last relay leg to finish in 26th place after 533 laps of the circuit and getting a very good fifth place in the A6-AM category. It’s true that after the qualifiers the team had hoped to do better, but considering how far behind they were at the start of the race, Patrice Lafargue’s men were clearly pleased and happy enough with the result of these 24 hours of testing conditions.

“We had a great race,” stated the team’s boss. “I stress how important it is to enjoy ourselves and this time we did that with the same group as last year along with Fred (Yerly) who has joined us. This was a fantastic comeback thanks to the work of all of the mechanics. Hats off to them. They got us back in the game at a point when we were feeling really down.” His son Paul confirmed this. “We were feeling low, but watching the team work so hard, I told myself I owed it to them to keep going. Jean-Claude (Ruffier) egged us on and we enjoyed it in the end.” This pleasure was shared with the newcomer to the team, the Swiss driver, Frédéric Yerly, who was particularly pleased with his start with the IDEC Sport Racing team. “This was my first experience with the team and the atmosphere and understanding we had were great. We were extremely disappointed late on Friday afternoon, but everyone gave it their all to ensure we got going again. We can really be pleased with this result.” A promising result that the team will be trying to confirm at the second event of the season, on 18th /19th March at the Mugello circuit, where they were so successful last year, as it was there that they achieved their first win of the year in the 24-Hour Series.