The ACO has revealed the list of 62 competitors who will be taking part in the 2020 Le Mans 24-Hour Race. IDEC SPORT will be lining up with the Oreca #28 driven by Paul Lafargue, Paul-Loup Chatin and Richard Bradley. The car will be getting a new livery for the 2020 ELMS season and Patrice Lafargue’s team will also be competing in a new championship: the Michelin Le Mans Cup.

On Friday 28th February, the Automobile Club de l’Ouest (ACO) confirmed the list of entrants for the legendary 24-Hour race in Le Mans. As last year, there were 62 registrations. The LMP2 category in which the Oreca #28, IDEC SPORT competes, is the largest with 24 cars. IDEC SPORT, the title-holder in the European Le Mans Series, was guaranteed a place for the 2020 Le Mans 24-Hour Race. Two cases have been brought before the authorities in Le Mans. While the suspense should not affect #28, the second car is still not certain of being there at the start, as it is on the reserve list in third place. #17 is the first LMP2 behind a GTE AM and an LMP1. For the moment, only United Autosports will be competing with two LMP2 cars.

“The real goal this season will be to win Le Mans, even if we will be fighting to do well in the ELMS championship,” explained Paul Lafargue, pleased to be back in the Le Mans 24-Hour Race for the fourth time. “In the ELMS, we want to be out in front at each meeting, but we won’t be focusing on the championship title right away,” added Paul after some private trials at Magny-Cours. “I was happy to be back behind the wheel of the Oreca. The Oreca is just as I remembered. It felt good and we can’t wait to check that out at the pre-season trials in Barcelona.”

Paul Loup Chatin was also pleased with the first laps of 2020: “We got everyone back on track with these trials. I can’t wait to be in Barcelona and get into the real stuff. The team is really motivated. We have had the same team now for three years. Our mechanics and engineers know us well and fully understand the car.”

The third LMP2 driver, Richard Bradley, has got to know his new team and has settled in well: “Richard is a driver who has already won the Le Mans 24-Hour Race and has a wealth of experience. He has adapted well and corresponds to the values of IDEC SPORT. I think we are going to be fast. That will help take us even higher. He is an excellent recruit,” said Paul-Loup Chatin.

Two IDEC SPORT cars in the Michelin Le Mans Cup
In addition to the European Le Mans Series, IDEC SPORT will be competing for the first time in the Michelin Le Mans Cup. A brand new Ligier JS P320 has joined the fleet of IDEC SPORT cars. The LMP3 will be in the hands of David Abramczyk and Romain Vozniak. The two drivers are used to driving in the colours of IDEC SPORT, as they were behind the wheel of the Porsche 991 Cup. Patrice Lafargue and Dimitri Enjalbert will be taking part in the GT category with the Mercedes AMG GT3.

“I’ll be doing the Michelin Cup with Romain (Vozniak). We share a passion so we said why not do the championship together. I put myself forward to be part of the team in LMP3,” explained David Abramczyk, who knows all about prototype racing, as he spent seven years in CN. “I love the aerodynamics and the excitement of prototypes. This was the perfect opportunity for me to enter P3. I really missed driving with IDEC SPORT. Patrice made me an offer and I immediately went for it. Car racing is my escape and my hobby.”

Dimitri Enjalbert is also very enthusiastic about the 2020 season. The Mercedes will benefit from a brand new chassis and engine with some modifications to her aerodynamics: “I’m delighted to be racing with Patrice (Lafargue). The GT is a category where she can do well and be up there at the front. Patrice always liked the Mercedes and he is one of the fastest gentlemen racers on the track. I can’t wait for the first race to see how everyone measures up. One thing is certain. Tactically, it is going to be very different from the 24 HR Series. There is just one sprint at the weekend, so you need to get it right.”

Patrice Lafargue is also in a hurry to get back racing on the tarmac: “We know that the Mercedes is a great car and I trust Dimitri to get us up to the standard. We’ll be taking it one step at a time, as that is going to be very different with two hour races in the GT. In any case, I’m pleased to be back with my mechanics and the whole team. They have done a remarkable job and I’m convinced it will pay off again this season.”

The Oreca #28 given a makeover 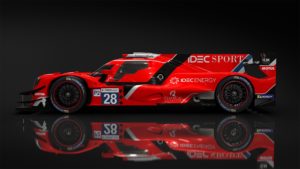 Like last year, the journalist/designer Adrien Paviot has been taking care of the livery for the IDEC SPORT Oreca #28 that will be competing in the ELMS and the Le Mans 24-Hour Race. It is certain that the new look will stand out around the European circuits. “I worked in particular with Paul Lafargue and the idea was to turn our backs on what everyone else is doing at the moment in terms of designs. The decoration is very simple giving our identity and the colour can be seen immediately. The IDEC SPORT is much redder and almost fluorescent. She can be seen from a distance with simple, flowing lines. We also did some work on the front section to keep her aggressive look, but the important things here was the choice of materials and stickers. We have left room for the sponsors and each colour was carefully studied, before being chosen and worked on. You can see the French flag on the rear tailfin to emphasise the French aspect of the team,” added Adrien Paviot.