“With the South Atlantic like that, we would never have smashed the Jules Verne Trophy record.” That was how Francis Joyon described the situation, still somewhat taken back by the vagaries of the South Atlantic at the start of this 26th day of racing. Yesterday, for the first time, he found himself behind the record pace for the Tea Route. Working hard with his crew, Francis has been busy since picking up the NE’ly trade winds trying to improve on the record pace. Sailing at more than 25 knots out on the water and at almost 16 knots on the direct route, he is now once again steadily increasing his lead and is now keeping a close watch on the vital transition phase to reach the North Atlantic low-pressure systems.

The Doldrums were baffling

“We weren’t messing around,” said Francis Joyon almost apologetically. “The Atlantic has not been very cooperative since we rounded the Cape of Good Hope. The systems were moving around unpredictably and very quickly and were quite the reverse of what we had on our weather charts. The Doldrums lived up to their reputation and were baffling. The boat slammed a lot in very choppy conditions, while we had very little pressure on our sails. The charts forecast the arrival of a NE’ly wind yesterday, a foretaste of the trade winds, but we found ourselves in a very light SW’ly air stream. We didn’t look at our position very often, but we suspected that Soldini and the crew of Maserati were doing well at that point back in 2018.”

A traditional route back to Europe 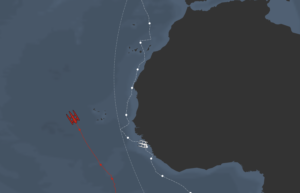 Today, conditions have evolved favourably for IDEC SPORT, well positioned in an 18-knot “very classical” NE’ly trade wind, according to Francis, with the boat sailing on a long regular swell. The gap is widening again as the maxi trimaran is following a highly traditional route for this type of voyage to get back to Europe. “We are sailing on the usual route towards the west of the Azores, where it appears that the weather systems are getting in position to allow us to deal with a transition phase that is not too complicated.” Once bitten, twice shy after the recent unusual stretch, Francis refuses to give us any indication of his arrival time. “We’re pleased to be back in cooler conditions. With the spray, the wet weather gear is out again and it is now much easier to get some sleep at night. The crew is making the most of that and enjoying themselves after feeling rather down in the oppressive heat and with the low speeds.”

With 2700 miles to go to the finish, all of the indicators are looking increasingly positive. IDEC SPORT is on a long starboard tack at a very tight angle, which should enable her to clock up almost 600 miles in 24 hours all the way to the Azores, which means they can look ahead serenely to entering the English Channel and then sailing up the Thames Estuary.