After two solo round the world records (2004 and 2007), three Atlantic records (2005, 2013 and 2017), winning the Jules Verne Trophy (2017), and his recent victory in the 2018 Route du Rhum, Francis Joyon and his loyal partner, the IDEC Group, are dreaming of new challenges with horizons beyond the Atlantic and the round the world course. 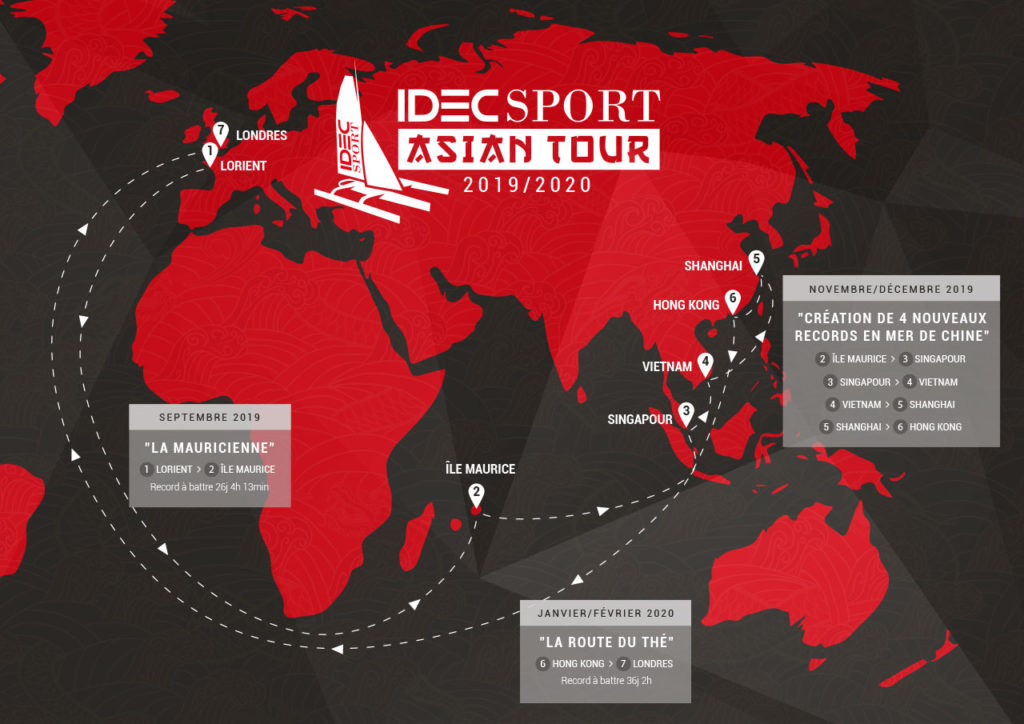 Opening new routes, sailing away across the sea, reaching out to people, widening the usual definition of ocean racing, which can be somewhat limiting… These are passions shared by Francis and Patrice Lafargue, the founder and president of the IDEC Group, who already in the past created new records. Towards the Indian Ocean and Mauritius sailing between Port-Louis (Lorient) and Port Louis (Mauritius) in 2009, then to Brazil, with the Friendship Route between Bordeaux and Rio de Janeiro in 2014.

The giant IDEC Sport and her skipper Francis Joyon have decided to step outside their usual playground and head to Asia, a region of the world where few races have stopovers. This latest record programme called IDEC SPORT-ASIA TOUR 2019- 2020 will be aiming to tackle seven major records including five new race courses between India and China, before they have a go on the way back at the legendary Clipper route from Hong-Kong to London.

Before beginning this Asian programme, the winner of the 2018 Route du Rhum will begin the season (May-June 2019) with a promotional tour in various ports around the Mediterranean during which he will attempt the Mediterranean record between Marseille and Sidi Bou Saïd (Tunisia).

6 records, on the silk route, the spice route and the clipper route….
More than six centuries ago, setting sail from Lisbon, the Portuguese navigator, Vasco da Gama opened up the route to India (1498), after a long voyage down the coast of Africa and rounding the famous Cape of Good Hope that his compatriot, Bartolomeu Dias had passed several years before. Vasco da Gama reached India after 309 days at sea, opening up a route to the major voyages of discovery towards unknown and sought after lands: the East Indies. Explorers, scientists, geographers, botanists and cartographers would spend centuries investigating this world, which had only just come out of the Middle Ages.

While today, there are no lands left to discover on the surface of the Earth, there are routes to explore, maritime history to rediscover and new records to be invented. That is what the Francis Joyon’s giant IDEC SPORT trimaran will be attempting next year in the context of the new record programme, the IDEC SPORT-ASIAN TOUR 2019-2020.

An attempt at the Mauritius record between Port Louis (Lorient) and Port Louis (Mauritius). Francis Joyon will be attempting to improve on his own reference time set while sailing solo ten years ago (2009), with a time of 26 days, 4 hrs and 13 mins

At the start of next winter, Idec Sport will sail between Malaysia, the Sea of Java and the South China Sea to launch four new ocean race courses and set reference times with a crew on the following routes:

The Clipper route is the route taken in the second half of the nineteenth Century by the famous clippers, those magnificent sailing vessels with sails towering into the air like cathedrals, as they raced each other home to sell their cargo of tea in London. Their habit of pushing hard across the oceans led to the creation of a real race between these Clippers, which took 99 days to sail from Hong Kong to London.

The French yachtsman, Philippe Monnet was the first in 1990, to set a reference time with a modern trimaran with a time of 67 days. Lionel Lemonchois grabbed the record in 2008 aboard a 100-foot catamaran, Gitana 13 with a time of 42 days. Since then, the time has been beaten and is now held by the crew of the trimaran, Maserati skippered by Giovanni Soldini, who was accompanied by two sailors we know well… Sébastien Audigane and Alex Pella, who were also part of the crew of IDEC Sport, when she won the Jules Verne Trophy with a time of 40 days in 2017. The Italian trimaran covered the distance in 36 days, 2 hours and 37 minutes at an average speed of 17.4 knots.

It is therefore this time of 36 days and 2 hours between Hong Kong and London that IDEC Sport will be trying to smash to complete her 2019-2020 programme.