Francis Joyon will begin the final Act of the IDEC SPORT ASIAN TOUR at around 0900hrs UTC on Saturday morning with an attempt at the Tea Route record. On this legendary route between Hong Kong and London, the reference time has been held since 2018 by the Italian, Giovanni Soldini. Once again with his small crew of four, including the boat captain Bertrand Delesne, the assistants and crewmen, Antoine Blouet and Corentin Joyon and his faithful friend, Christophe Houdet, Francis will be sailing on the route he sailed to get to the Far East at the end of last year, but this time in the opposite direction and without stopping. During his outward voyage he set a new record for the Mauritius Route between Brittany and Mauritius and two new reference times for the trips between Mauritius and Ho Chi Minh City (Vietnam), and then between Vietnam and Shenzhen in China. His latest goal is to complete the voyage back to Europe in a time below that set by the 70-foot trimaran, Maserati and Giovanni Soldini’s crew of 36 days, 2 hours and 37 minutes, when they averaged 17.4 knots. 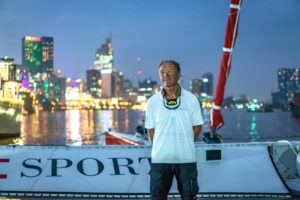 Following the route taken by the big clippers of the past

“We left Shenzhen yesterday for Hong Kong and the starting area for the record.” Francis is not planning to hang around and intends to set sail on Saturday morning at around 0900hrs UTC. By then, he will have carried out the final adjustments aboard the boat, tightening the tension of the mast and loading up the supplies for the long sprint that lies ahead of around 13,000 theoretical miles. “We have done our utmost in conditions that were not that simple to check the condition of the boat,” added Francis. “The crew is really enthusiastic about this route, which is so full of history, symbolising the trade between the British Empire and China. We shall indeed be bringing some tea back to London, as the big clippers of the past used to do. This time it will be organic tea from a fair trade source, as that was something that was important for Christophe Houdet.”

The route is largely characterised by the trade winds that the IDEC SPORT maxi trimaran is looking forward to. “We shall be setting off in some decent conditions,” explained Francis. “They are nothing special, but it does mean sailing downwind in the NE’ly trade winds as we head towards the Sunda Strait and the awesome calms that punished us so much on the way out here. It looks like it is going to be particularly calm around the Equator. Once into the Indian Ocean, there is the risk of a cyclone, where we could face average winds of 35 knots, but we will continue to sail downwind.” Sailing the vast distances in the South and North Atlantic will as usual mean dealing with the large Saint Helena high pressure system in the South and the Azores high in the North, before we make our way right up the English Channel towards the Thames Estuary. “This Tea Route is really the big one for us in our epic adventure,” added the skipper of IDEC SPORT. “Christian Dumard, our weather advisor, expects to see us reach the Cape of Good Hope within the record time. So, there should be a lot of suspense on the climb back up the Atlantic.”