It was smiles all around for the IDEC Sport Racing team at the penultimate event of the VdeVseason, the Magny-Cours meeting, with all three cars on the podium. In GT, Patrice and Paul Lafargue won the 4-Hour race in their Porsche, while in the Protos, the two Ligiers finished third in the 6-Hour, in the overall rankings for n°17, and in the Prestige category for n°15. They can now look forward to Estoril where the Lafargue family will be attempting to win the GT and Proto championship.

GT: And that makes three 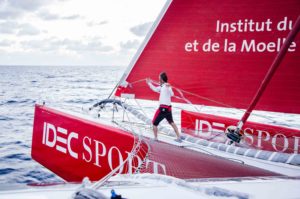 After the Catalonian event and the Aragon Motorland, IDEC Sport Racing have got a third win in the GT Touring car endurance event at the Magny-Cours 4-Hour. It was far from simple however, as the Porsche 911-GT3R set off at the back of the grid, because of a mistake made by Paul Lafargue in the qualifying races: “I went a bit mad, because I was simply too keen, and that led to a clutch failure.” The damage was soon repaired by the technical team and Patrice Lafargue made up for this mistake, getting off to a quick start before his son continued to do well: “We immediately got the settings just right, which meant that in spite of being at the rear, we soon made it back up with the frontrunners and continued there without being too handicapped. By the finish we had extended our lead over the car in second place,” said a very pleased Patrice Lafargue, for whom this success was much more than simply winning after a fantastic comeback: “It’s something you should experience, setting off from the back, as that gives you a real boost of adrenalin. It’s a sheer pleasure to win in such conditions.”

This third win of the season means that IDEC Sport Racing has moved up a place in the overall rankings to second place behind Visiom’s Ferrari F458, which should lead to an exciting final event in just under a month in Estoril (6-7-8 November). “This result is great after the disappointments at the last meeting on the Paul-Ricard circuit,” added Patrice Lafargue. “We still have a little handicap, but we’re fully motivated now for the final race in Estoril. It’s going to be a real final. We’re practically assured of making it to second place, and we will be giving it our all to reach the summit.” 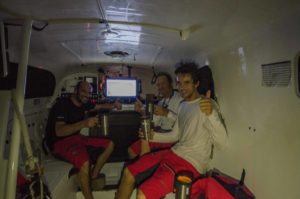 On the day after the success in the GT, Paul and Patrice Lafargue, accompanied by Dimitri Enjalbert as the finisher, once again were able to enjoy the pleasures of the podium, this time in the prototypes. Fifth on the starting grid, the Ligier JS53 did really well again with Paul getting off to an excellent start: “It’s been a while since I lined up for the start in the prototypes. The car was simply fantastic and was very well prepared. The engineers got it just right for the strategy.” The result was that the Ligier continued to advance to finish third on the same lap as the two frontrunners, with Dimitri Enjalbert pleased with the work done by the technicians: “From the start of the meeting, we worked hard on the adjustments for this race and that meant we had a very high performance car. Paul and then Patrice did the hard work and I pushed hard all the way to the finish, so we got some precious points.”

Patrice Lafargue was equally pleased as this result enables IDEC Sport Racing to be even better placed for a final overall victory in Estoril: “I would have given anything to get this result. We now have two big finals to look forward to in Portugal. What’s different from in the GT, is that we aren’t yet certain of finishing on the podium, and we’re going to have to watch what is going on ahead and behind us.” The strategy?  “We’ll be going out there with the same way of doing things we’ve had since the start of the season. In other words, feeling relaxed and not getting any complex, as it is often like that that we’re the best. It would be fantastic to finish first, especially seeing this is the first season for IDEC Sport Racing, but we’ve already won the 24-Hour series, so whatever happens, we can be pleased with our season. Estoril will just be the icing on the cake.” Talking of the icing on the cake, at the Magny-Cours meeting, the Ligier n° 15 driven by father and son De Rocha and William Cavailhès took third place in the Prestige prototypes, which led Frédéric Da Rocha to declare: “This is the first time this season that both IDEC cars have finished on the podium. This success encourages us to get some more.” Maybe in Estoril?