For their first race of the year in the European Le Mans Series on the Silverstone circuit, the IDEC Sport Racing team made it to seventh place in LMP2, which is encouraging for the rest of the season.

For what was a first outing, they certainly faced a lot of things. The snow in the morning cooled down the track. This was followed by rain during the qualifying session, before it dried up and the sun appeared for the four hours of racing. The IDEC Sport Racing team’s drivers were treated to all sorts of conditions on Saturday at the opening event in the European Le Mans Series at the Silverstone circuit. In spite of their lack of experience, as they are just beginning in the LMP2, Dimitri Enjalbert, Patrice and Paul Lafargue managed to make the most of the situation, ending up in seventh place in their category and overall, which at this stage of the competition is very pleasing.

The first to go on the eighth place on the grid, Dimitri Enjalbert set the pace, moving away from the traffic, which meant he was able to avoid the collisions that marred the start. “It was utter confusion ahead with lots of smoke and gravels. I couldn’t see anything. There were cars everywhere. I got out of trouble by moving to the left before getting back on track, meaning the way was clear for me to express myself and get into the swing of things. I didn’t take too many risks when overtaking, unlike some of the others. The difference isn’t always down to your time, but on how you manage risks. That’s something we are trying to avoid this season and we know we can get by like that. We’ll stick with that philosophy. We know that the races are long, that the season is going to be long and that we are here to learn. It’s on the track that we learn, not up against the wall.” 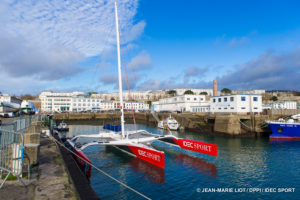 This way of doing things worked well on the British circuit, as it enabled Dimitri Enjalbert to hand over to Patrice Lafargue when up with the frontrunners. Paul Lafargue finished in style coming in seventh, which was pleasing for everyone. “The chequered flag was a relief for the whole team,” admitted the latter. “Frankly, earlier in the weekend, I didn’t think we would get there, so it was great seeing it. Seventh for a first race means we didn’t make fools of ourselves.”

This satisfaction was shared by his father, Patrice Lafargue: “I enjoyed it and was pleased to see the car was so well set up. I felt rather apprehensive, but Dimitri showed us the way and the car was relatively easy to drive. At the age of 54, you have to keep at it and try to stick with the youngsters. It’s a bit violent however, but it’s a fantastic challenge for me not to hold them back too much.” Mission accomplished in general for the boss of the IDEC Sport Racing team, which before getting back in the European Le Mans Series between 13th and 15th May for the Imola 4 Hour Race, will be out there again next weekend for the second leg of the VdeV season at the Le Mans Bugatti circuit.

You can view pictures of this event here