IDEC SPORT RACING has just grabbed their first title of the season. Winners of the 24-hour series in Barcelona on Sunday, Patrice and Paul Lafargue, accompanied by Dimitri Enjalbert and Gabriel Abergel, are certain of winning the Championship even before the final event of the season in Brno. Consequently, the team will now be focusing on the VdeV championship, hoping to finish as high as possible after the final two meetings of the year.

The champagne was out for IDEC SPORT RACING. For their first season in the new colours, the race team set up earlier this year by Patrice Lafargue won their first title on Sunday, walking away with the 2015 24-Hour Series in the Porsche 997 category. After a fourth place in Dubai at the start of the season, wins in Mugello in March and in the Paul-Ricard in July, the team needed to finish in at least fourth place at the Montmelo circuit to be certain of winning the title. It did much better than that winning the event with a clear lead after an almost perfect weekend, finishing fourth overall, which was their best result of the season.

“We were in control from start to finish,” confirmed a very pleased Patrice Lafargue. “In the trials, we were lucky to find the right adjustments for the car, which meant that afterwards we could ease off. During the qualification, we didn’t push too hard and just did the bare minimum to avoid wear and tear on the car. In the race itself, we wanted to avoid piling on the pressure, and we were relaxed when we raced, enjoying ourselves, particularly as it was a real pleasure to drive the car. Even if the standard was high, everything fell into place. We didn’t have any real problems, so it was just right to get a good result. So, in short, it was the perfect win!” 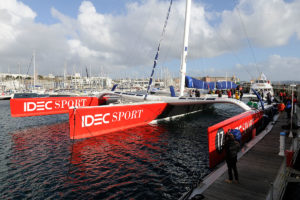 All the more perfect as it allowed IDEC SPORT RACING to get their first success with a first title, which was one of the goals this season, according to the head of the team. “We have taken part in this championship on several occasions and were aiming to win. I particularly like the 24-Hour Series. This is a race format over 24 hours, which corresponds perfectly to our team. Incidentally, this is the third time we have won in Barcelona, so we clearly like this circuit.” Once we had passed the chequered flag, the team celebrated this win, which was very pleasing a week after a complicated weekend in the VdeV championship at the Paul-Ricard circuit.

“We were very pleased, with all the excitement shared by the whole team, particularly after a disappointing weekend, when we had a lot of mechanical problems, which really handicapped us, both in the Proto and GT, which doesn’t happen very often, as we were well placed for final victory,” added Patrice Lafargue. “It’s great to get a good result immediately, as it is very encouraging for the whole team.” The other positive aspect is that this title was obtained even before the final event of the season in Brno (9th-10th October), from which IDEC SPORT RACING will be missing in order to focus on the VdeV meeting in Magny-Cours, which takes place at the same time (9th-10th-11th October). “It is indeed good news to be crowned before the end of the Championship, as that will mean we can give it our all at the VdeV. This title is good for everyone, and we are now more motivated than ever. We shall be competing in the final two events (Estoril on 6th-7th-8th November after Magny-Cours), which come one after the other, without piling the pressure on ourselves, but whatever happens, we shall be doing our utmost!” concluded Patrice Lafargue.